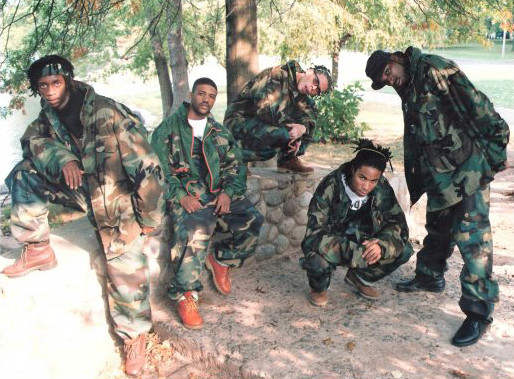 The group, which was initially made up of E-Knight, Four-Fif, White-AL, Razen Kane, Black Assassin & 9 Lives, was active in the mid 90's.

Their 1st release, the 12" maxi-single "Hitmen Holdin' Steel/Cocbacda 9", came out in 1996 on Close Range Records. It was recorded at legendary D&D Studios & entirely produced by E-Knight. Even though both tracks are straight fire, it just had a few radio airplays thanks to Stretch & Bobbito.

Camouflage Large returned in 1997 with the Promo 12" "Regulate/Hear Me Out/Heavy Hitters", dropped on their own outfit, Camouflage Large Records. Once again, it's just some ill mid 90's classic east coast sound (2 of the 3 songs are produced by Latief, a great producer who worked with Busta Rhymes, Masta Ace, Onyx or Grand Puba among others) with razorblade flows. So good to hear it right now, even for those who are not 90's nostalgics (the song "Heavy Hitters" is just timeless)...

Unfortunately, Camouflage Large stayed below the industry radar & never made it big. Due to their lack of budget, they didn't even had the chance to drop a full length release, which is a shame, but some members are still doing music right now at an underground level.